July 1957 marked the beginning of the International Geophysical Year, when scientists around the world planned to jointly observe various scientific phenomena. It was during this period of scientific cooperation that the Soviet Union stunned the world with the launch 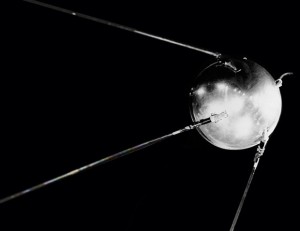 of Sputnik, the first satellite ever.

On October 4, 1957, the USSR put into orbit a tiny sphere with a radio transmitter that beeped its way into history. The JPL community was surprised that the Soviets could have both a successful launch vehicle and the electronic technology to operate the satellite.

The United States needed an immediate response. The first attempt, the Naval Research Lab’s Vanguard project, failed. Their rocket exploded in full view of the press, embarrassing the nation.

JPL and the U.S. Army’s Ballistic Missile Agency in Huntsville, Alabama, then pooled resources and knowledge. In about 80 days a four-stage rocket was assembled. JPL’s canister-shaped Explorer 1 satellite formed the nose of the rocket.

On January 31, 1958, Explorer 1 launched and became the first U.S. satellite, using its single instrument to send back data about the radiation environment high above Earth’s surface.

This started the “space race” with the Soviet Union.

Did you know the United States began working on rockets decades before NASA was even created? America’s space program was originally run by the military, with the Army, Navy and Air Force all working on their own space projects. On Jan. 31, 1958, the U.S. Army Ballistic Missile Agency successfully launched the first American satellite, Explorer 1. The spacecraft was designed by the Jet Propulsion Laboratory, the same organization behind the Mars Exploration Rovers of today. The primary instrument on Explorer 1 was a cosmic ray detector designed to measure the level of radiation in Earth orbit.

Image to right: Dr. William Pickering, Dr. James Van Allen, and Dr. Wernher Von Braun hold a model of the Explorer 1 vehicle above their heads. The three were key figures in getting America into space. Credit: NASA.

The idea behind a communications satellite is simple: send a signal into space, and send it back down to another spot on the globe. NASA engineers soon discovered the easiest way to accomplish this: bounce signals off a giant metal balloon floating in orbit. The concept was developed into the aptly-named Echo program, and Echo 1 became the first successful launch of the project on Aug. 12, 1960. The balloon enabled voice communication of “good quality” between scientists at Bell Laboratories in Holmdel, New Jersey, and a NASA facility in Goldstone, California.

Image above: Echo 1 sits fully inflated at a Navy hangar in Weeksville, North Carolina. The spacecraft measured 100 feet across when deployed, and was nicknamed a ‘satelloon’ by those involved in the project. Credit: NASA.

Want to find out how long it will take for that thunderstorm to reach your town? Turning on your local weather report and seeing an image of the globe from space is something we often take for granted, but 50 years ago meteorologists had no way to get “the big picture.” NASA’s first true meteorological satellite was TIROS 1, designed to test whether or not it was even practical to look at weather from space. The spacecraft launched on April 1, 1960, and took over 22,000 photographs of cloud cover before it was shut down in June of the same year.

NASA’s Project Mercury had specific goals, and the first of those was very clear: to orbit a manned spacecraft around the Earth. On Feb. 20, 1962, that goal was accomplished, as John Glenn sped around the globe three times inside the capsule nicknamed “Friendship 7.” The mission lasted only five hours, but NASA’s “manned satellite” program is now in operation 24 hours a day: It’s known as the International Space Station.